For Newark native Hassan Abdus-Sabur, cycling symbolizes a sense of freedom and perseverance; exploring paths less traveled, finding a rhythm in the midst of change, and opening his eyes and mind to new sights and realizations along his life’s trail. The outdoor pastime he developed an affinity for while riding through the city as a youngster, has evolved into an avenue for social change in adulthood. The Brick City biker—who founded the HBCU Scholarship Bike Ride—is using cycling to economically empower scholars at historically Black colleges and universities.

In the realm of higher education, disparities run deep. Studies show 80 percent of students who attend HBCUs borrow loans at greater rates to finance their education and have higher levels of unmet financial needs. Behind those statistics are stories of first-gen scholars who put their education on the back burner due to financial setbacks, students with vast visions of using higher education to elevate their lives but often have their dreams deferred due to hefty tuition bills, and graduates who are greeted with mountains of debt after walking across the commencement stage. Those stories are reflective of the circumstances Abdus-Sabur faced nearly 30 years ago as a sophomore at Howard University, and he’s set out on a mission to change the narrative for future generations.

While coming of age in Newark during the soulful 70s, Abdus-Sabur was surrounded by individuals who exemplified HBCU excellence. Although his parents didn’t go to college, they stressed the importance of education. Seeing influential individuals in his community like now Mayor Ras Baraka—his childhood friend’s older brother—attend Howard University showed him that there were no limits or bounds for a kid from Newark. As a teenager, the Black sitcoms on television like The Cosby Show, A Different World, and Martin where characters donned varsity sweatshirts emblazoned with the names of cultural pillars like Howard, Hampton, and Tuskegee University—proudly displaying their HBCU pride—cemented his desire to want a slice of that experience. Attending a historically Black institution was a rite of passage.

When Abdus-Sabur stepped foot on Howard’s campus in 1991 to begin his freshman year, it was a dream realized. Nestled in the heart of DC, the campus was overflowing with an aura of Black excellence. Some students traveled from Ghana to advance their education, there were scholars who were budding social leaders on the front lines for justice, many were shaping culture, and hip-hop was in its golden era so it wasn’t a rare occurrence to see Puffy or Brooklyn-bred lyricist Biggie Smalls on campus. The biggest lesson grasped during his time at Howard was that the Black experience isn’t monolithic, and the diversity of distinctive narratives interwoven into the fabric of the culture is what makes it special.

“It was so beautiful,” he told NewsOne. “Anybody you wanted to see in the world of Black culture was there. Coming from Newark, I was thinking if I go to an HBCU, everybody is going to be like me. That wasn’t the case. You realize that Black people don’t exist in a monolith. I was learning from all these great professors and people, both within and outside the classroom.”

Abdus-Sabur’s journey at Howard came to a halt nearly two years later when financial burdens got in the way of finishing his degree. “After my sophomore year, I just didn’t have the bandwidth to figure out how to go back” he candidly shared. “I came home, lingered around, and life moved on.” As he pedaled into other chapters of his life, securing a blue-collar job and starting a family, he was left with a void that stemmed from not completing his degree at Howard.

In 2020, when his best friend’s niece Marbella—who was a fellow Bison—needed financial support to stay in school, Abdus-Sabur sprang into action and launched a cycling fundraiser. “Once he told me that she might not be able to go back I was triggered and it reminded me of my experience,” he said. “I was like we have to do something.” He and a group of friends traversed from Newark to Washington, D.C. via their bikes. He streamed the journey on social media and raised $7,000 to put towards her tuition. The path was no easy feat as COVID restrictions were in full effect, but determined to support Marbella the collective of bikers persevered.

What started as an act of kindness to support a student in need, has emerged into a movement. Abdus-Sabur has organized the annual HBCU Scholarship Bike Ride and has also spearheaded the creation of an HBCU Textbook Fund in partnership with GoFundMe’s GoFindYou initiative—designed to amplify stories centered on changemakers spreading Black joy. Through the project, he helps scholars at historically Black colleges and universities make ends meet and ensure there’s accessibility to the tools needed to thrive academically. This past year he’s raised upwards of $60,000 for the annual bike ride and nearly $30,000 for the textbook fund with the support of a $20,000 donation from GoFundMe.

“As part of the GoFundMe Heroes program which recognizes the everyday people changing their communities for the better, we are honored to spotlight Hassan for his dedication to expanding access and opportunity for HBCU scholars,” Leigh Lehman, GoFundMe’s Director of Communications, told NewsOne. “In collaboration with the GoFindYou platform, Hassan is continuing this effort by distributing $500 textbook reimbursements to HBCU students. We hope that through this program we will inspire more Black and brown individuals to get past the stigma of asking for help and support them in achieving their dreams.”

Abdus-Sabur’s project has sparked a cycle of inspiration; empowering HBCU students to persevere through hardships, carrying the generational Bison legacy through his nephew who now attends Howard, and motivating the biker to pick up where he left off three decades ago as he’s currently finishing his degree at Rutgers University. 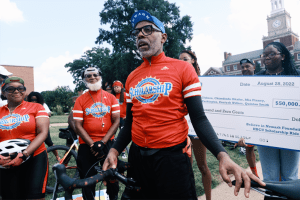 Abdus-Sabur is a firm believer that financial obstacles shouldn’t be a deterrent to education and is dedicated to eliminating socioeconomic barriers standing in the way of college access. As his social impact efforts evolve, he wants to continue supporting scholars and use his projects to amplify the cultural and educational significance of HBCUs within the landscape of higher education.

Noting the endowment disparities between HBCUs and other institutions, he hopes there is a greater investment in historically Black colleges and universities so that the playing field is leveled and more learning opportunities can be cultivated.

“From Senator Raphael Warnock at Morehouse to Stacey Abrams at Spelman, look at the greatness HBCUs have produced. They produce incredible leaders across different industries. HBCUs are important because they fundamentally give you a safe space to operate in for four years and those formative years are probably the most thought-provoking time in your life,” he shared. “When you give someone a safe space to operate in, all types of great things happen.”

Chicago Blackhawks lose for the 11th time in 12 games, falling to the Columbus Blue Jackets 4-1 in ‘one of our worst performances of the year’

Woman killed in hit-and-run accident on West Side

An aspiring Venezuelan rapper was shot in Cicero,...

Some CPS schools could start year with...